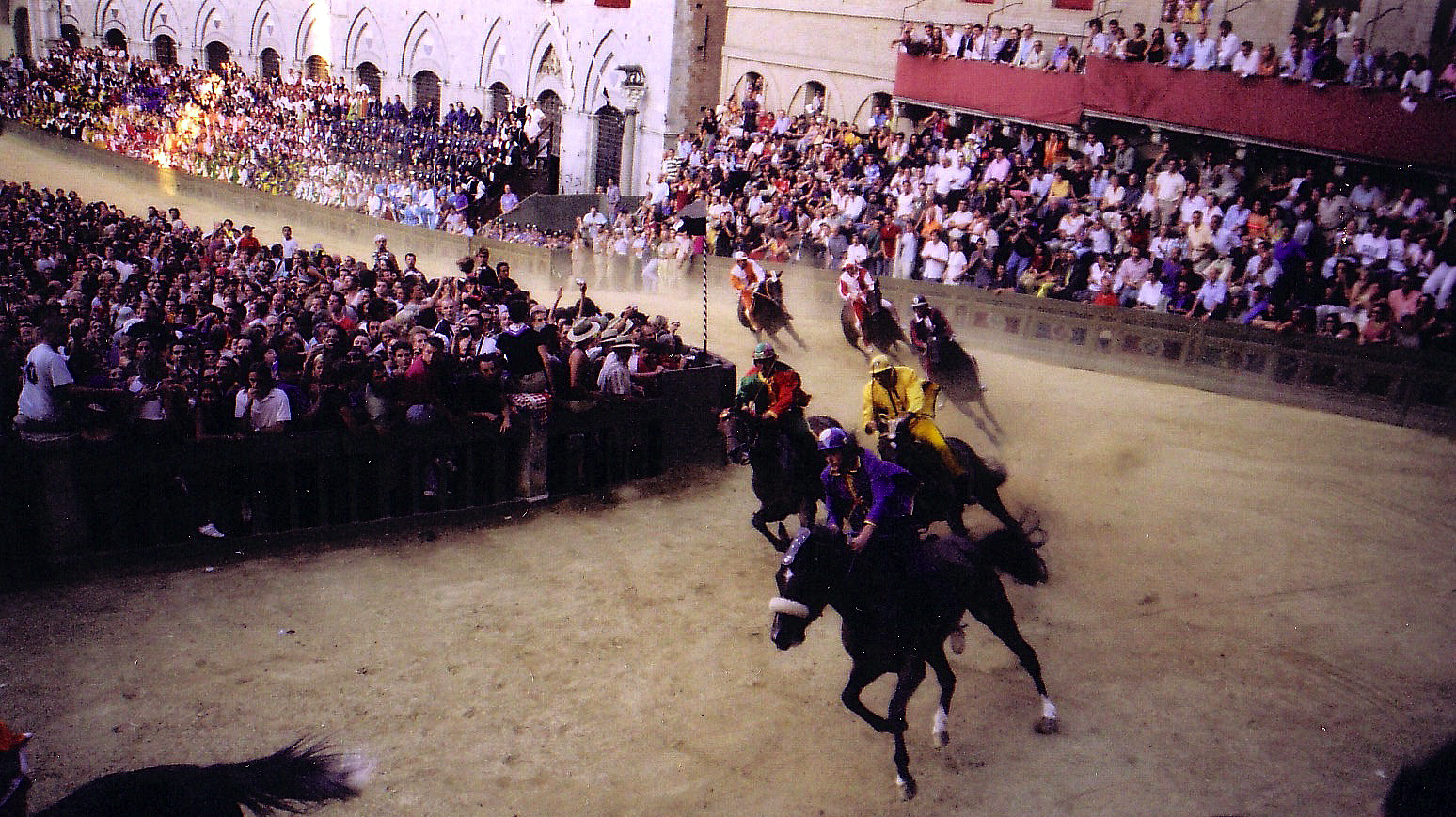 I have seen Il (the) Palio 9 times. The palpable combination of emotion, intensity, and history make it a unique spectator experience that never gets old.

Without the visual and auditory nuances of first-hand experience, it is difficult to convey the spectacularality. That said, try to imagine the Piazza Del Campo-the heart of Siena turned into a horse race track, where 8 inches of dense clay-like dirt covers the stone walkway that surrounds the center. The race consists of 3 laps which lasts approximately 90 seconds. The jockeys ride bareback at heart thumping speeds down an unven pitched track with several dangerous turns including a 90 degree bend where more often than not jockeys are thrown from their horses. And if the horse that finishes first comes in without a rider, that contrada still wins. The horse is the undoubetdly the star of the competition. The crowd is always at max capacity, including standing room only in the center and temporary stadium seating on the outer rim of the piazza. The atmosphere goes from absolute silence when the contrade are announced to a combination of screaming, crying, and jubilation.

The Palio serves as a metaphor for those born in Siena. Held every July 2 and August 16, this spectacle has a history that began centuries ago. It is a way of life all year round for those who relive the history that enfolds in the Piazza Del Campo of Siena twice a year.

Siena is a city of 17 contrade, or boroughs. The contrade held an important military and adminsitrative role in the middle ages, and now remains an opportunity to show civic pride and patriotism. All contrade take part in the processional of the Palio, but only 10 participate at a time in each Palio.

The horse is assigned to each contrada by lottery, and from the time each is assigned to the race, there is always a barbaresco, or caretaker, that watches over the horse, even to the extent of sleeping next to the animal. This is done to protect the horse from a competing contrada.

The winning contrada takes a flag, or palio, and the victoriuos horse is showered with hugs and kisses. However, if a contrada’s horse comes in second, or if a specific ‘enemy’ of a contrada wins even though that contrada may not be in the race, the members of that contrada can be seen openly sobbing.

The Palio is a passion that further unites an already tightly-knit society. From beginning of the display to the end of the race, when celebratory songs are sung by the winning contrada, there is symbolism of Siena’a past, reinforcing the unity of a people whom historically struggled to maintain their survival.

If you plan to visit Siena in early July or mid-August, Il Palio is a unique cultural experience, and an exciting addition to any itinerary. A knowledgeable guide is necessary when it comes to arranging tickets for the race, and/or attending any of the accompanying festivities.